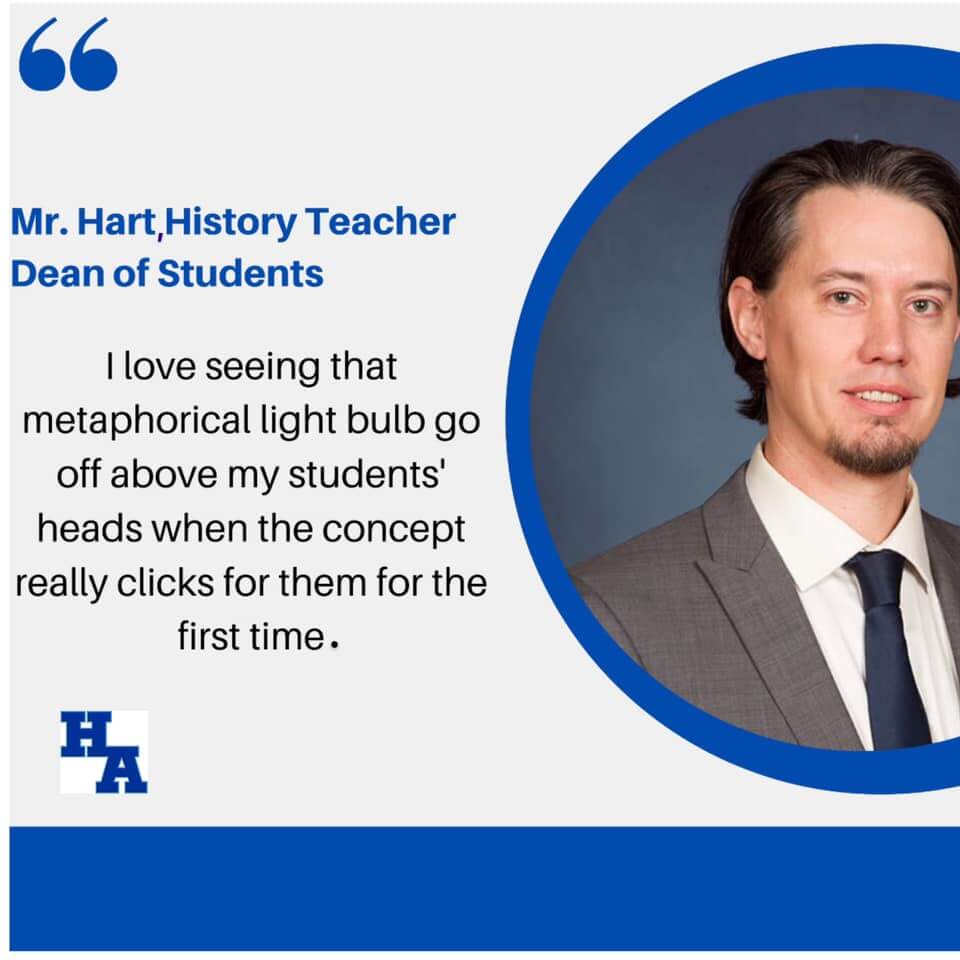 HA US DM: What was the hardest song for you to learn to play on the guitar and why?

Mr. Brian Hart: Hardest song to learn…probably whatever the first song I tried to play was…which I don’t even remember now.  Learning guitar is tough at first, but thankfully it gets easier.  Now I can learn a much more complex song more easily because I see the fingerboard differently, understand some music theory, and have some muscle memory in my fingers that you simply don’t have when you first start.  Of course, there are plenty of songs I can’t play…I’ve never mastered the guitar solo from Metallica’s “One” which I’ve tried a time or two.  What I’m working on now is dabbling into some Jazz, which is different/tough for me because the songs aren’t as repetitive as typical pop music you’d hear on the radio.  “The Christmas Song” is one I have to relearn every year because the chords are constantly changing and not repeating.

HA US DM: Why did you decide to learn to play the guitar?

Mr. Brian Hart: Why did I learn to play…I guess because I love music.  I’ve always enjoyed music since I was a small kid.  I’ve always loved to sing too, and unlike other instruments you can accompany yourself while singing with a guitar…you really can’t do that on trumpet or flute.  Also, I enjoy performing music, and being able to sing and play an instrument is always an asset for any band looking to add a member.  I also learned to play because if you can play guitar you are cool, right?

HA US DM: What is the hardest thing about your job as the Dean of Students?

Mr. Brian Hart: The hardest thing about being Dean of Students…probably having to tell people things they don’t want to hear.  I don’t think anyone particularly enjoys being told that their child has done something wrong or they will face some kind of consequence for their actions.  That topic usually isn’t an ideal conversation starter, so that makes the job tough on some days.  There are plenty of good things about it, but that is what makes it difficult sometimes.

HA US DM: What is your favorite thing about teaching government and economics?

Mr. Brian Hart: Favorite thing to teach…in terms of content probably when I do the Congress simulation with my seniors in Government.  It’s an interesting role reversal because I’m more on the sidelines while they lead the conversation and engage with the material.  It is a lot of fun for me to see them actively use what they’ve learned and applied it appropriately.  I probably enjoy it more than the kids.  More big picture, I love seeing that metaphorical light bulb go off above one of my students’ heads when the concept really clicks for them for the first time or they come to a new insight or realization they didn’t have previously.  Personally, I love to learn and think, so it excites me to see others do the same and for me to know that I was a part of it.

HA US DM: What have been some memorable moments as the boy’s tennis coach?

Mr. Brian Hart: I’ve had a lot of memorable moments over the past 12 years with both the boys and the girl’s teams, but if you are asking specifically about the boy’s team here’s one:  Celebrating with my team in 2018 after winning the state title in boys tennis for the 1st time in thirty years.  That team had 3 seniors and 2 juniors so that was the culmination of a lot of hard work and dedication.  It would be hard for anyone to believe that wasn’t there, but those tennis match finals against Montgomery Academy had the energy and excitement in the stands of any football game or basketball game and that’s not typical for tennis.  It was like watching heavyweight boxers slug it out round after round.  That was a talented team from top to bottom.  I also remember almost having my head taken off at the net by Trey Craven and Robert Dunlap…both those guys have a monster forehand.

Thank you, Mr. Hart, for all you do for our HA community! 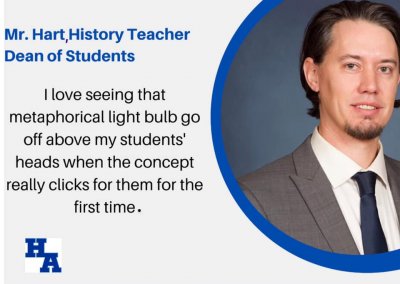 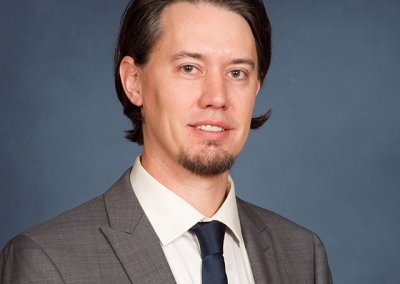